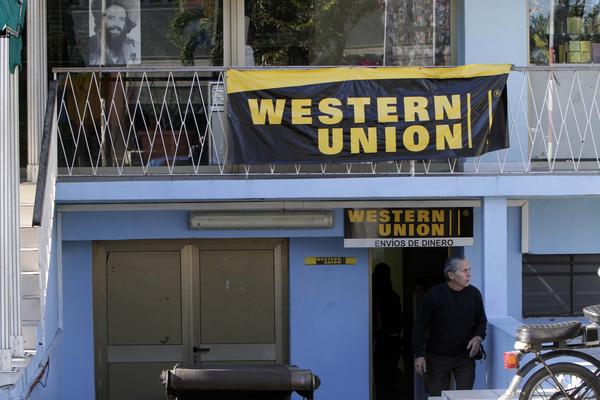 What’s in the Cards for Western Union in Cuba?

One of the Trump administration’s final blows toward the Cuban people was the shuttering of the leading U.S. remittance agency in Cuba. The closing of Western Union in Cuba affects the subsistence strategies of Cubans who rely on family members in the US for cash to buy basic goods as well as the emerging private sector.

This was the last step in a series of measures affecting remittances, which previously included imposing a sending limit of US $1,000 per quarter, implemented in September 2019. In June 2020, the US Treasury Department included FINCIMEX —the Cuban agency run by the military that manages and administers receipt and distribution of remittances— on the Cuba Restricted List. This left Western Union without a local partner, leading to their closure in late November 2020.

Former Secretary of State Mike Pompeo tweeted that “Cuba is the only country in the hemisphere where the military takes a cut of remittances.” Though the argument for preventing FINCIMEX from working with Western Union was to stop any siphoning of funds to the military, researcher Denisse Delgado Vázquez told Startup Cuba that “the policy causes considerably more damage to Cuban families and private entrepreneurs.”

Join Startup Cuba’s Weekly Newsletter For More Stories Like This

“Given the current economic crisis, it’s difficult for the population to access essential food products, and then only by waiting in hours-long lines. On top of that, the prices of products have risen, not only in dollar stores but also in state-subsidized general food stores. Western Union has played a large role in enabling those Cuban families who rely on remittances to buy those products when they’re available in the markets.”

With a population of approximately 11M on the island, some 2.3M Cuban Americans reside in the United States. About 50% of remittances sent to Cuba come in through Western Union, representing between US $900M to US $1.5B annually, with Havana receiving two to four times as many transactions as other provinces in Cuba. The majority of the remaining estimated 50% of remittances are largely moved in unofficial channels, such as family members bringing cash in suitcases or the so-called mulas who go back and forth transiting money and goods, alternatives that were already severely limited by travel restrictions imposed due to the pandemic. The closure of Western Union in Cuba has, on the other hand, benefitted US-based informal service providers who charge their clients a fee to transport money and goods; and anecdotal reports have shown days-long delays in baggage processing, as well as irregular customs processes in recent months.

According to the annual FIU Cuba Poll, around 50% of South Florida Cuban Americans believe that U.S. citizens should be able to invest in Cuba, and 46% reported that they would invest in Cuban businesses.

Cuban-American voters in South Florida played an outsized role in the 2020 presidential elections, but despite the media attention given to hardliners, according to the annual FIU Cuba Poll, around 50% of South Florida Cuban Americans believe that U.S. citizens should be able to invest in Cuba, and 46% reported that they would invest in Cuban businesses. Given the extremely limited clientele in an economy that largely depends on tourism for income, particularly in businesses in the private sector such as restaurants and casas particulares, entrepreneurs have been severely affected both by the shortage of goods and the elimination of a major remittance channel.

The Cuban Central Bank has been evaluating the possibility of continuing Western Union’s remittance services through another agency, REDSA, a non-military entity in charge of managing the Cuban ATM network and debit cards.

Western Union, which has a network of more than 550,000 retail agents in more than 200 countries and territories, recently announced that it will offer its money transfer services at more than 4,700 Walmart stores across the United States, which would make the service more accessible to Cuban Americans and others who send money abroad.

President Biden has promised to roll back some sanctions on remittances, as well as other twilight measures implemented by the Trump administration meant to hinder any efforts at a re-opening, including returning Cuba to the U.S. list of state sponsors of terrorism in their final days.

With increased Internet and connectivity, Cubans have been quick to turn to high-tech alternatives such as cryptocurrency to access the funds they direly need to make ends meet.

If the Biden administration approves Western Union’s return to the island, the services could be quickly restarted, as the company’s infrastructure —technological networks, physical structure, and potential workers— remains intact.

Last week, Western Union CFO Raj Agrawal told Reuters that the company is hopeful that “putting aside any concerns that there may be from the administration standpoint, that they [the Biden administration] allow us to move the money for people who want to move money to their loved ones.”

On the Cuban side, Delgado Vázquez told Startup Cuba that we could expect a greater expansion of digital transactions on the island, including remittances, due to the expansion of Internet technology in Cuba. For instance, coverage and 4G technology is currently being expanded in several provinces of the country. Necessity is the mother of invention in all aspects of life on the island, and with increased Internet and connectivity, Cubans have been quick to turn to high-tech alternatives such as cryptocurrency to access the funds they direly need to make ends meet.

More of the Latest From Startup Cuba

Erin Goodman has been an editor and a contributor at Startup Cuba. She is a longtime follower of US-Cuba relations and contemporary Cuban culture. Erin first traveled to Havana in 2002, and later founded a travel and translation company, taking groups of women to Havana with a focus on the arts and entrepreneurship. She has translated for The New York Times, OnCuba Travel, and many other publications.

What It Was Like to Actually See People Again

How Salsa Dancers Danced Through the Pandemic

Book Review: The Most Beautiful Girl in Cuba

Mariel’s Palacio de Rubens: A Castle on the Edge of Collapse

Experiencing Cuba Through Airbnb: From Opportunities to Challenges

¡Bienvenidos! Thank You for Being Here!