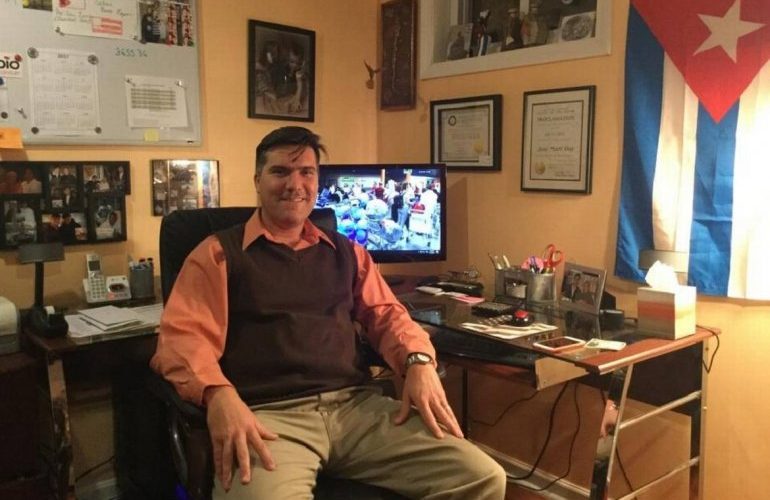 Nathan Cryder
7 min read
2 comments
FacebookTwitterEmailLinkedInWhatsApp
With an estimated 26,000 Cuban Americans — Kentucky ranks among the top five U.S. states in terms of Cuban-Americans as a percentage of total population.

Kentuckians are a proud people. For anyone who has visited, it’s not difficult to find a local who’ll try to persuade you that theirs is the most beautiful, friendliest, and all-around wonderful of the states. Cubans, regardless of whether they reside on the island or in exile, are also an extremely proud people. They may love Fidel Castro and his revolution, or they may think it’s the worst thing to ever happen to Cuba. But that doesn’t seem to make a bit of difference in how much they love their homeland. When you combine the two peoples and cultures, you get ‘kentubanos,’ a term coined by Cuban native and Kentucky resident, Luis David Fuentes.

Fuentes was a mechanical engineer living in one of Havana’s nicer neighborhoods when he left what he considered to be an overbearing regime in his home country, in 1997. After a few years living in Chile, Fuentes and his wife, Yamilet, moved to Frankfort, Kentucky. Fast forward another eight years, and he created a tabloid newspaper, El Kentubano, to appeal to Cuban Americans living in and around Louisville, the state’s largest city with over a half-million residents.

With an estimated 26,000 Cuban Americans —the majority of whom live in or around Louisville— Kentucky ranks among the top five U.S. states in terms of the Cuban-American population as a percentage of total state population.

With an estimated 26,000 Cuban Americans —the majority of whom live in or around Louisville— Kentucky ranks among the top five U.S. states in terms of the Cuban-American population as a percentage of total state population.

Whether it’s at the popular Havana Rumba restaurants in Middletown or Bardstown Road or the Bodega Mi Sueño Grocery Store and Bakery in West Buechel, Cuban flags can be seen in nearly every corner of Louisville these days. Luis describes it as a “cultural revolution” that has manifested in a variety of ways. There have been musical performances by the Mambo Kings and Gente de Zona, theater productions like Guiando a Molly, and high-profile visits from Cuba’s Ambassador to the U.S. and a Catholic bishop, who was accompanied by a replica of one of Cuba’s greatest national treasures, Nuestra Señora de la Caridad del Cobre (Our Lady of Charity).

Back to the Fuentes: their original intention was to settle in Miami; however, when his aunt connected him and Yamilet to her son-in-law living in Frankfort, they decided to first go there to receive a firsthand primer on American culture, including learning fluent English. In Miami, the Cuban community is so large that many Cuban Americans have no real need to ever “assimilate.” All over Little Havana and other Miami neighborhoods, one finds Cuban cafes, restaurants, and just about every kind of Cuban-owned business one can imagine.

The longer they stayed, the more they grew to love the area and the more apparent it became that the pros of staying in Kentucky outweighed those of moving to Miami.

The first year was difficult, Fuentes says, as the only work he could find was sweeping floors in a local factory. After a few years, though, he received his engineering degree and became the environmental supervisor at the factory.

Related Post: What the Heck Is Latinx and Why Should It Matter?

The longer they stayed, the more they grew to love the area and the more apparent it became that the pros of staying in Kentucky outweighed those of moving to Miami. Fuentes also noticed an influx of Cubans coming to Louisville, because finding jobs and affordable housing was easier there than in South Florida. Greater Louisville, he says, offers lower costs, larger incomes, and a more welcoming environment for Cuban Americans than Miami or Tampa, despite its smaller size and Cuban population.

“So many people were leaving Miami,” said Fuentes, “and a surprising number of them were relocating to Louisville, because there are several established refugee location programs based here. We knew they would need help settling, and we wanted to create something that could promote our Cuban culture at the same time. As an immigrant, it almost feels sometimes like being born again, like you have to start from zero. Cubans aren’t used to banking, doing taxes, using credit cards, or using the internet. And the school and healthcare systems here are totally different. It’s an entirely new social system. It’s hard for an immigrant, and I’m lucky to be in a country full of opportunities, even for people who are not fluent in English.”

El Kentubano has even expanded to Tampa, creating a sister publication called El Puente, which is edited by Fuentes’ brother who moved there from Spain six years ago.

And so after careful deliberation and with Yamilet’s blessing, he took the initiative in 2009 to print the first issue of El Kentubano, a free tabloid newspaper supported by local advertising and designed to appeal to the region’s Cuban-American population. He found a publication designer and printer, made 1,000 copies of the first 20-page issue, removed the back seat from his Toyota van, and dropped off copies to all the restaurants, stores, and other places where Cuban Americans congregated.

“Of course, I miss Cuba, but what I love about the US is all of the opportunities.”

Ten years later, and it has now grown into a 90-page monthly magazine in color with 10,000 copies of each issue distributed throughout the region. Two years ago, El Kentubano won the “Kentucky Minority-Owned Small Business of the Year Award” from the Kentucky Small Business Development Center. Moreover, reporters from The New York Times, NBC News, the Herald-Tribune and others have visited Fuentes’ home office in his basement to report on the local Cuban population. Most people, even in the area, have no idea how large and dynamic it is.

“It’s amazing to see the national eyes on us, because of the ways we’ve been able to make the Cuban community here so tight-knit.” says Fuentes, who was recently invited to appear on a live broadcast in Miami to talk about the Cuban community in Louisville. El Kentubano has even expanded to Tampa, creating a sister publication called El Puente, which is edited by Fuentes’ brother who moved there from Spain six years ago.

When asked what he’s most proud of since arriving in the US, Fuentes points to photos of his two children, a daughter and a son. But then he adds, “I’m proud of how much this community has been able to accomplish in such a short time. And I’m proud to live in a country that values freedom of speech.”

There it is again, that word: “proud.” I can’t resist asking, “Are you more proud to be an American, a Cuban, or a Kentuckian?”

“Luckily, I don’t have to choose,” he says with a laugh. “I came up with the word ‘Kentubano’, because it’s all three in one. I’m a proud Kentubano. Of course, I miss Cuba, but what I love about the US is all of the opportunities. Yamilet and I have been able to do so many things here that we could only dream about before we came. We’re teaching that to our kids, and now we’re trying to teach that to everyone in the Cuban community who needs it.”

Nathan Cryder is a vice chair of the Engage Cuba coalition in Kentucky and has traveled to Cuba on 14 occasions. He has a broad range of executive and leadership experience in the business, government, non-profit, and education sectors. Currently he is Managing Partner at Edelen Ventures and a special advisor to 2014 Nobel Peace Prize Laureate Kailash Satyarthi. In 2016, Nathan arranged Mr. Satyarthi's official state visit to Cuba for the purposed of engaging the country's leaders in the Kailash Satyarthi Children's Foundation's "100 Million for 100 Million Campaign" to increase global awareness of child labor and child slavery. Nathan is also a co-founder of Breakout, the world's largest escape room company, as well as Sig Luscher Brewery. Nathan holds dual master’s degrees in diplomacy and sociology from the University of Kentucky and a B.A. in sociology from Miami University. He resides in Lexington, Kentucky with his daughter and son.

How One Hundred Years of Solitude Became a Global Classic

Poll Results: What DeSantis Did With the Venezuelan Immigrants Was…

‘Chancla Culture’: And Why It Hurts So Much

We Stand with Blackout Tuesday