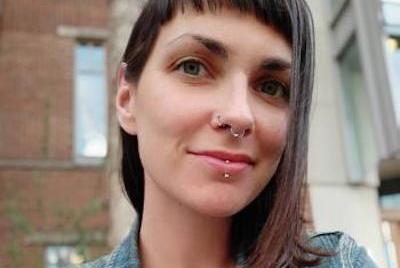 What Being a Punk Means in a Country Like Cuba

Carmen Torre Pérez
10 min read
Add comment
FacebookTwitterEmailLinkedInWhatsApp
Why doesn’t anyone expect there to be a punk scene in Cuba, and why doesn’t it have real visibility in the country?

In a video interview I conducted with the band Manopla, their vocalist Alejandro spoke about what punk culture means in a country like Cuba: “It’s difficult to be a punk here in Cuba. So when you see a punk here in Cuba or something, foreigners are amazed, right? And they say ‘Damn, a Cuban punk rocker.’ Because everyone thinks that here we only have maracas, and salsa, and all that … you know? There are other things, too … there’s salsa and timba, and all that, but we’ve also got mohawks.”

Alejandro’s comment is representative of the opinion of the vast majority of Cuban punks. who throughout numerous personal interviews I’ve conducted have always insisted that being punk in Cuba is more difficult than elsewhere. And, from what I’ve been able to observe during my research stays in the country, it also reflects the general attitude of foreigners who travel to Cuba. Why doesn’t anyone expect there to be a punk scene in Cuba, and why doesn’t it have real visibility in the country?

Although the first punk bands emerged in England and the United States in the late 1970s, this subculture wasn’t present in Cuba until the early 1990s, coinciding with the beginning of the “Special Period.”

I’ve spent the last five years trying to answer these questions, making numerous trips to the island that have allowed me to create an extensive network of contacts and collect musical recordings and testimonies from members of the punk scene in Cuba. In addition to being part of my doctoral thesis, the materials that I’ve compiled are part of a short documentary, which is currently in the editing stages. They have also shaped the creation of the website punkcubano.net, the first digital archive dedicated to this musical subculture on the island. Through this site, my hope is to pay tribute to a subculture that we have very little information about, while helping to spread its history and musical production beyond national borders.

“…everyone thinks that here we only have maracas, and salsa, and all that … there’s salsa and timba, and all that, but we’ve also got mohawks.”

Alejandro, vocalist in the band Manopla

Rockers and Punks in Socialist Cuba

Although the first punk bands emerged in England and the United States in the late 1970s, this subculture wasn’t present in Cuba until the early 1990s, coinciding with the beginning of the “Special Period,” and at the core of a socialist regime that rejected art forms from the English-speaking world. After the triumph of the Revolution in 1959, every American culture of influence began to be associated with imperialism and was rejected in favor of a national culture that was considered more authentic. As a result, it was difficult to get and listen to rock music coming out of the United States in the second half of the 20th century. Instead, Cuba entrenched itself on its own political and cultural path.

Throughout the eighties, some Cubans … began to harbor growing discontent towards the government and its policies. From this sector of young Cubans a new subculture emerged: “los frikis.”

Despite the barriers, Cubans continued to listen to rock and its sub-genres — that is, clandestinely. According to Javier ‘el Copia’: “Cuban rockers emerged when the Russian VEF and Selena radios arrived in Cuba,” which enabled “listening to foreign radio stations easily.” The situation was far from optimal, since not all households had “the good fortune of having antennas” and those who did “began to listen to music that was a little out-dated, they began to discover bands that used to exist.” A lot of music was not even broadcast, in particular music that was more extreme or less commercial. The first punk recordings arrived on the island in the 1980s, through the smuggling of cassettes that were brought from neighboring countries.

Throughout the eighties, some Cubans, and especially the young generations that had already been born in the revolutionary period, began to harbor growing discontent towards the government and its policies. From this sector of young Cubans a new subculture emerged: “los frikis.” The term, which in today’s Cuba is used as an umbrella concept labeling people who are fond of rock and its sub-genres, had a more specific meaning in the eighties: it was used to describe a community of young people with long hair and ripped pants and who openly listened to heavy metal and other extreme sub-genres of Anglo-American rock.

I found a community that was “anti-everything”: like the punks of the global north, they’re against neoliberalism and imperialism, but, as poor and marginalized Cubans, they also reject the Cuban socialist model.

Viewed as a threat to the country’s social and cultural norms, frikis were marginalized and oppressed by the state from the start. Ramón, founding drummer of Eskoria, one of the most famous punk bands in Cuba, remembers some of the humiliations they suffered: “They persecuted us, they shaved my hair a thousand times, they beat me in the park, they put us in jail for no reason, just for sitting there talking about music; we didn’t do anything wrong, or steal, or anything.” Shaving long-haired frikis’ heads, just like the beatings, fines, and arrests, were practices that used to fall under the Ley de peligrosidad social (Social Dangerousness Act), which permitted the “preventive” punishment of citizens who were considered prone to commit a crime.

Punk exploded within this underground community in the early 1990s, just as the fall of the Soviet bloc precipitated the start of the Special Period. Punk became a tool for expression and “artistic struggle,” in the words of Mundi, a pioneer of the movement in Cuba. I was able to interview Mundi before his death in early 2020. “Punk,” he said, “is revolutionary, not communist, but it is revolutionary … what you cannot do with weapons, sometimes you can do with what you have, with your instruments, your voice, your lyrics…” Mundi is right: the music from those early years is characterized by fierce criticism of the system and, influenced by the context of crisis and scarcity of the time, is fraught with despair and pessimism. In fact, musical expression was not the only answer to the social situation that punks lived at the time. Many abused hallucinogenic drugs, and a certain sector chose to inject themselves with HIV in order to enter an “AIDS sanitarium.”

Today, punk is not as repressed (although censorship and certain forms of police harassment are still the order of the day), and there is currently a young vanguard of musicians who have breathed new life into the movement.

In the sanitariums, state hospitals where HIV positive patients were quarantined, inmates were forcibly isolated from the outside world, but they could obtain other perks, such as skirting the compulsory military service or enjoying air-conditioned accommodations and three meals a day (a luxury that many punks couldn’t afford at the time). Belkis, one of the oldest frikis in the town of Santa Clara, saw many of her friends die of AIDS and assured me that “if it were now with all the information there is, they wouldn’t have done it. Rather, they were fleeing from the [military] service and the government, the police, the media.”

Things have changed since those early years. Today punk is not as repressed (although censorship and certain forms of police harassment are still the order of the day), and there is currently a young vanguard of musicians who have breathed new life into the movement. These new punks are more connected to the rest of the world, thanks to the openness to international tourism and the popularization of internet access, and they show a less hopeless and pessimistic attitude than their predecessors —perhaps because they have not had to live through the worst years of the Special Period— although they continue to be very critical of the Cuban regime. Israel, singer in the band called Pólvora Soxial, decries “we are going hungry, we have nothing, there is so much need, children without milk, people who live in cardboard houses,” and regrets the hypocrisy of the government and the tourism industry: “Many famous people from all over the world come here to Cuba and when they come, the streets are painted for them and they put on a nice show, like a carnival. These people do not really perceive the Cuban reality.”

“Many famous people from all over the world come here to Cuba and when they come, the streets are painted for them and they put on a nice show, like a carnival.”

Like Israel, many Cubans believe the country is entering a “second Special Period.” In the last year there has been a shortage of basic necessities and cuts in public transportation, electricity, and water. For some, like Pedro, a member of the defunct bands Eskoria and Adictox, “this is the real moment to make punk music because of everything that’s happening. … We should take advantage of this moment to defend what we want, to communicate to people what we really want our island to be someday.” Although it’s hard to imagine the scope that punk can have in the social and political life of the country —since it has never ceased being an alternative and marginal phenomenon— it’s true that although in other countries, punk culture is aging and giving way to other musical phenomena, in Cuba this movement is still alive and active. Thanks to initiatives like punkcubano.net, the musical production of punks on the island is more accessible today than ever.

My interest in Cuban punk arose by chance: I was given the opportunity to apply for a scholarship to do field work in Latin America and I had always wanted to go to Cuba. As a participant in the punk scenes in other places, which often express appreciation for socialism and the island’s regime, I was interested in contextualizing Cuban punks. Upon arrival, I found a community that was “anti-everything”: like the punks of the global north, they’re against neoliberalism and imperialism, but, as poor and marginalized Cubans, they also reject the Cuban socialist model. In their day-to-day lives, besides working to try to earn a living —punks make mattresses, collect garbage, and sell sweets— they dedicate themselves to punk music and culture in a completely solidary and self-managed way: repairing instruments with materials around their homes, sharing the few available resources among the different bands in the area, and broadcasting their music recordings for free.

On my trips to Cuba, they have always treated me as just another punk, opening doors to their world and making my research possible. In return, I’m doing my best to make their story and music known to the rest of the world.

Carmen Torre Pérez is a PhD student at the University of Pennsylvania. A member of the punk scene in her home region of Cantabria, Spain, her research looks at punk and “friki” culture in Cuba as an alternative gateway to the country’s history of the last thirty years. She has curated the website punkcubano.net, the first digital archive devoted to punk music on the island.