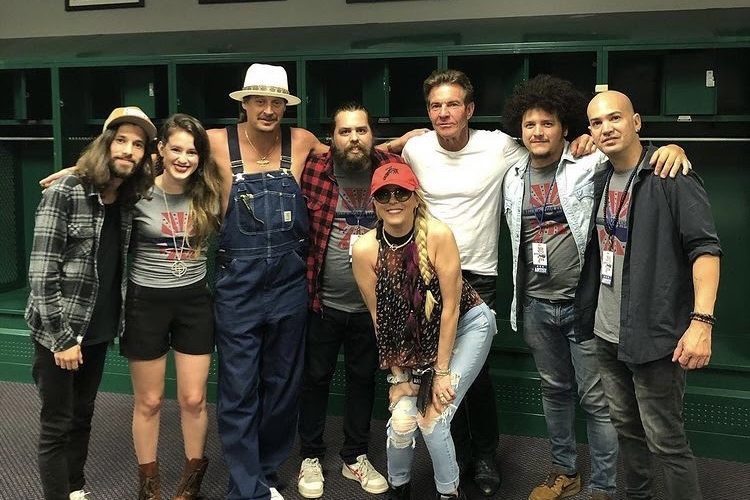 Cuban indie pop-rock group Sweet Lizzy Project has always done things their own way. While the first step for most bands would be to agree on a name, SLP–as the group prefers to be called–worked backwards, designing their logo without yet knowing exactly what they would call themselves. Founders Lisset Diaz, the lead singer for the group, and Miguel Comas, the lead guitarist, already had an idea of what the “L” and “P” would stand for: “Lizzy” for Lisset’s childhood nickname, and “Project” because the band was a work in progress. All they were missing, then, was the “S”.

“Yo no sé, yo no soy sweet,” Lisset laughs as she tells me the group’s origin story over Zoom. “Or I’m, I don’t know…I’m not so particularly sweet that the band should be called ‘Sweet Lizzy Project.’ But we’re too far along in our career to change the name now!”

The band has enjoyed the increased creative freedom and access to resources that they have here in the U.S., and have even continued to play despite COVID-19.

While she may not be sweet–though her sunny disposition would suggest otherwise–Lisset and bandmates Miguel, Alejandro Gonzalez, Wilfredo Gatell, and Angel Luis Millet are all wicked talented. A biochemist by training with a love for singing and songwriting in English, Lisset never thought she would make a career out of music. “I thought I would save my songs for my grandkids,” she shares. “Iba ser la cool grandma de las canciones.” But that changed when she met Comas, a guitarist and music producer, and showed him her songs.

The two decided to produce a record together, aptly titled The Beginning, which was nominated for two Cubadisco awards in 2013. Seeing how positively their music was being received, Diaz and Comas decided to form a full-fledged band. In 2015, the group took home a Cubadisco award for their first album, Heaven, and watched their popularity grow steadily from there. However, SLP’s real breakthrough was the release of “Turn Up the Radio,” a country-fied English-language version of Descemer Bueno’s “Súbeme la Radio” (originally sung by Enrique Igelsais) that had the whole island spellbound.

In 2017 the band was selected to participate in the PBS documentary Havana Time Machine, which detailed the musical journey of Raul Malo, lead singer of The Mavericks, through Cuba. Recognizing their talent, Malo offered SLP a recording contract in Nashville, where the band has been based for the past four years.

“Musicians face challenges everywhere, but in Cuba those challenges begin much earlier. Even once you find a place to play, sometimes you can’t, or there’s the issue of the instruments…”

“The city is lovely. I love that I finally have all four seasons,” Lisset jokes. “The first year was hard, but it was as hard as it would have been anywhere else. I’d never been away from home for so long without seeing my mom, my grandmother…And it wasn’t just me, we all came together, so it was everyone dealing with those feelings.”

Despite the homesickness, SLP finished recording their album Technicolor–which they had started recording in Cuba in a makeshift studio in Wilfredo’s apartment–at Blackbird Studios in Nashville and began to build their American following. Touring was particularly fun, as it allowed the band to both perform and get to know different cities across the U.S. It also didn’t hurt that they got to work with some of music’s biggest names, like rapper Kid Rock and two of Lisset’s personal idols, Joan Jett and Heart.

Although they’ve been pretty successful here in the U.S., Sweet Lizzy Project hasn’t forgotten where they came from. They had their first few practice sessions in the garage of Lisset’s house in La Lisa, an out-of-the-way area of Havana that made rehearsals a bit of a headache. Then there were all the usual challenges of making music in Cuba, like finding decent instruments.

“We got our first good drum kit–which we still have at my house in Cuba–from a Canadian,”

“We got our first good drum kit–which we still have at my house in Cuba–from a Canadian,” Lisset says. “He saw us playing in a hotel and asked, ‘How is it that a group as good as you doesn’t have a drum kit?’ And he sent us one from Canada.”

One of the band’s biggest challenges on the island, though, was the lack of institutional support. As if singing rock n’ roll in Cuba–where bolero and salsa reign supreme–weren’t hard enough, singing original songs in English made the Cuban government even less inclined to offer SLP support.

“To perform in Cuba, at least in government-owned places, you have to go through a state mechanism,” Lisset explains. “That means you have to have papers from a music school, something that legitimizes you as a professional musician. When I’m here in the U.S. and tell people about our experience in Cuba, it’s really difficult to explain, but that’s the system that exists.”

The band has enjoyed the increased creative freedom and access to resources that they have here in the U.S., and have even continued to play despite COVID-19. If they didn’t, Lisset shares, they may well have gone crazy.

“We all rented a house together here in Nashville precisely because we figured we were barely going to be home,” Diaz laughs. “But of course we weren’t expecting that there would come a year where we’d be here all the time. It was hard. During quarantine, you’d have really optimistic days, with all these dreams and expectations and plans. But other days, you don’t even want to get out of bed, and you start worrying about what’s going to happen […] So the best idea was to keep ourselves busy.”

They started doing live streamed shows every night at 9pm CT, with people as far away as Indonesia tuning in for these “Sweet Quarantine Sessions.” SLP was delighted to see a real community emerge from their repeat attendees, with many fans opening up about their own struggles during COVID-19 and checking in on each other during the live stream.

For now, SLP has scaled back their Sweet Quarantine Sessions in order to work on their next big record. Inspired by the repression of rock n’ roll in Cuba in the 70s, the album will touch on broad themes of censure, liberty, and self-expression, and will hopefully feature collaborations with Cuban artists that the band admires. Now that things are reopening, SLP is also hoping to play more gigs and keep promoting Technicolor, whose initial promo tour was cut short by the pandemic.

Related Post: Los Hermanos Is a Film That Unites Through Music and Brotherhood

When asked what SLP would like to see change with regard to the music scene in Cuba, Lisset Diaz offered this parting thought: “There are friends of ours back in Cuba, Tracks, Los Locos Tristes, that are super good, super talented, and they struggle so much,” she shares. “Musicians face challenges everywhere, but in Cuba those challenges begin much earlier. Even once you find a place to play, sometimes you can’t, or there’s the issue of the instruments…I hope that eventually everyone is free to create what they want, independent of genre, and that they don’t have to pass through those intermediaries between the artist and the public.”

You can catch SQS Vol. 1, the first compilation of SLP’s Sweet Quarantine Sessions, on all streaming platforms now. I definitely recommend that you give it a listen!

Book Review: Of Women and Salt by Gabriela Garcia

7 New Cuban Alternative Music Bands You Should Know About

“S.O.S Cuba,” The Song: Another New Anthem For The Island?