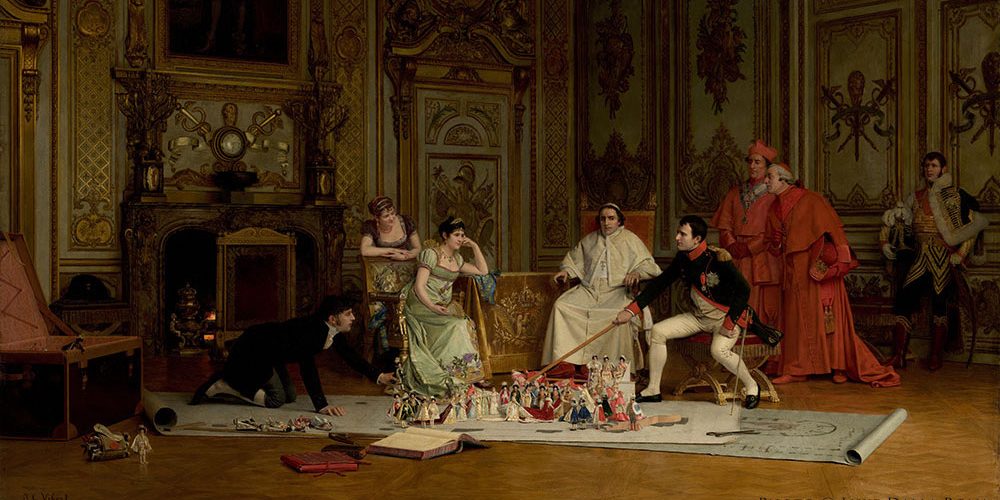 Havana’s Napoleon Museum Is Arguably the Finest Outside of France

Between gently wafting canary yellow curtains and the thrust of a large mahogany sleigh bed, in the Havana Napoleon Museum, I look down at the quiet face, a composed picture of death.

In the stillness of Havana’s unrelenting heat, the closed eyes of the bronze death mask – an immortal capture of the face of Napoléon Bonaparte – lies beneath the ceiling of painted baby blue and a glinting, cut crystal chandelier. What it’s doing in Havana, set on a bedside table on a marble floor in a grand mansion museum, is a story baked in mystery and underscored by ridiculous wealth.

“Havana’s Napoleonic Museum is arguably the finest Napoleonic museum to be found outside of France,” Luke Dalla Bona, author of a new book to the collection, tells Startup Cuba.

“The story of how all of these priceless artifacts of immense historical value came to be in Cuba, how they survived Cuba’s Revolution to be in the first new museum opened by Fidel Castro in 1961, and how they have survived below the radar of the Napoleonic community for over 60 years, all adds to the mystic and importance of this museum.”

“It contains items of immense historical value – from all categories. There are 400 items on permanent exhibition but the entire collection holds more than 5,000 items including books, lithographs and artifacts.”

The beginning of this remarkable story has all the hallmarks of a classic whodunnit. The end is an extraordinary alignment of one Cuban’s impressive wealth and lifelong obsession with the 19th-century emperor of the French.

Venezuelan-born, Cuban-grown Julio Lobo, a wealthy sugar baron who admired Napoléon, began his collection with an autograph he bought from his father while still a child. Throughout the course of his storied, hardworking 20th-century life Lobo acquired the vast bulk of Havana’s Napoléon memorabilia.

But decades earlier, what is not clear is what happened after Napoléon died. Various accounts exist of the following story. Two nights after Napoléon’s corpse was cold, two doctors smeared ground minerals over his face. It wasn’t the first mask. That had been taken the night before in wax by British military physician Archibald Arnott.

The two doctors at work on the night of May 7 1821 on the island of St Helena, a small volcanic British outpost in the southern Atlantic, almost 2,000 kilometers off the coast of southwest Africa, were English military surgeon Francis Burton, and François Carlo Antommarchi. Antommarchi, a Corsican, was the private doctor to Napoléon I, from 1818 until the emperor’s death at 51, three years later.

That night, at St Helena’s Longwood House, a damp and windswept building, Napoléon’s home in exile for the previous six years after his defeat at the Battle of Waterloo at the hands of a British coalition, the skullduggery begins.

Parts of the death mask were stolen either by Antommarchi or by Fanny Bertrand, wife of Count Henri-Gatien Bertrand, one of Napoléon’s generals.

According to Chantal Prévot, writing for the Fondation Napoléon: “The majority of accounts agree that, overnight… Antommarchi or Madame Bertrand removed the central part of the cast (comprising the eyes, nose and mouth) without Burton’s permission.

“Compte Bertrand is supposed to have offered Dr Burton compensation for this loss, but the latter took offense, refused the offer, and tried in vain to win back his property by judicial means. This theory is rejected by Antommarchi’s descendants, who allege that Burton was in some way involved in the theft of the cast.”

Dalla Bona, a Canadian archaeologist and Fellow of the International Napoleonic Society whose new book “The Collection of the Museo Napoleónico, Havana, Cuba” is to be published by Mare et Martin in Paris agrees on the confusion. He says Antommarchi returned to France with either the first or a second generation copy of the death mask and proceeded to make copies in plaster and bronze.

The Musée des Beaux-Arts Montreal, caretakers of a bronze death mask after Antommarchi, claims the Corsican doctor waited until 1833, when his rival Burton was dead, to begin issuing copies of the death mask he’d made years earlier.

If in doubt: “Cast in plaster and in bronze, the Antommarchi mask bears his signature on one side and a small bronze medallion of the Emperor’s head in profile, wearing a laurel wreath, at the front,” the museum states.

The true story of the origin of the death masks may never be known but what is not disputed is that in a quiet street, close to the lofty walls of Havana’s university in El Vedado, a neighborhood of leafy streets and gated columned villas of the Cuban capital, is a sumptuous Florentine mansion. Behind its large wrought iron doors, studded with the polished bronze heads of lions are one plaster, and one bronze death mask of Napoléon plus a spell-binding collection of paintings, porcelain, curios, furniture, guns, statues, chandeliers, and letters related to the French military general and emperor, crowned by a very handsome top-floor mahogany library.

Dalla Bona tells Startup Cuba: “It contains items of immense historical value – from all categories. There are 400 items on permanent exhibition but the entire collection holds more than 5,000 items including books, lithographs and artifacts.”

The collection was valued at US$3 million in 1959.

In the third floor ‘Bedroom’, the magnificent sleigh bed, flanked by decorative sphinx, and slept in by Napoléon, is laid with the very bed linen used at Longwood House.

Among the many standouts across the four floors are Napoléon’s felt and silk trademark bicorne hat, worn in exile; a pair of pistols he carried at the 1812 Battle of Borodino; his fancy silver and gold plate toothbrush of horsehair, embossed with a capital ’N’ (and his extracted molar); an 18th-century gilt bronze and Baccarat crystal chandelier Napoléon gave to his wife, Joséphine, on their marriage; the original painting Napoleon Planning his Coronation by Jean-Georges Vibert; and a cluster of dried Everlasting Daisies, the flowers cultivated on St Helena by Napoléon and which were gathered up from around his tomb.

A relatively new addition to the museum is Napoléon’s pocket watch set at 5.49pm, the time of his death on May 5 1821. When Raúl Castro wed Vilma Espín in January 1959, her French ancestors who had acquired the watch in Santiago de Cuba, gifted the couple the historic timekeeper. Following the restoration of the museum in 2011, Raúl donated the watch to the collection.

How did all these valuable items eventually end up in Havana? Following Napoléon’s death, Antommarchi worked in Europe, the US and Mexico; in 1837 he travelled to Santiago de Cuba to stay with a relative. Packed into his luggage were the masks, the pocket watch, and other Napoléon possessions. Antommarchi died in 1838 of yellow fever and is buried in the Santa Ifigenia Cemetery in Santiago de Cuba.

In Havana, in the sugar boom years of the first decades of the 20th century, astute Julio Lobo was racking up piles of money. In 1927 Lobo struck the largest sugar deal in the world – a US$6 million sale to Britain’s Tate & Lyle. His fortune derived from 16 sugar plantations, an airline, and a bank, among other assets. Despite being a workaholic, he found time to woo Hollywood actresses, tend his garden, and develop an obsession with the French emperor.

After Cuba’s 1959 Revolution, Che Guevara asked Lobo to become the general manager of the island’s soon-to-be-nationalized sugar industry, writes FT journalist John Paul Rathbone in The Sugar King of Havana, The rise and fall of Julio Lobo. But Lobo the capitalist and always-master-of-his-own-destiny couldn’t accept, and he left Cuba.

Rathbone writes that in 1960, Lobo was preparing to house his Napoléon collection in a new museum to be built at Hershey sugar town, east of Havana. Dalla Bona says Natalia Bolívar, rebel fighter for the Castro brothers and an anthropologist, was asked by Lobo to take care of his collection. In 1961 the government opened the Havana Napoleon Museum inside a home designed by architectural firm Govantes and Cabarrocas, the same company that designed Havana’s white Capitol building. This Vedado palazzo, built in 1928, belonged to a Neapolitan, Orestes Ferrara, who had fought for the Cubans in the 1898 Spanish-American War. Later he became a lawyer and a politician.

As in life, when Lobo was considered to have a Midas touch, his rich legacy of Napoleonic memorabilia has left the Cubans with a world-class museum.

Dalla Bona’s book will be printed in English and French and then published by the City Historian’s Office in Havana in Spanish. Dalla Bona first visited the Museo Napoleónico in 2011. He swapped collecting Beatle memorabilia for Napoléon’s, and in 2012 began work with the director of the museum Sadys Sánchez Aguilar, later gaining approval from Eusebio Leal Spengler, the Historiador of the City of Havana, for the book.

Claire Boobbyer is a freelance travel writer who writes travel features for the UK national press as well as international media, mostly about Cuba, Vietnam and Laos. She's also written articles about Central America, South America, and Morocco. As a travel guide she's led tours for Smithsonian Journeys, National Geographic Expeditions, and New York Times Journeys among others. Claire is the author of the newly published Havana Pocket Precincts Guide (Hardie Grant) as well as the last three editions of Frommer's Cuba. She's been visiting Cuba for 20 years and the island is her second home.

Pack for a Purpose Delivers Supplies to Communities in Cuba

What Cuba Needs To Do To Put Food on the Table

Cuba Just Rolled Back Vaccine & Testing Requirements: Are You Going This Summer?

Book Review: Of Women and Salt by Gabriela Garcia