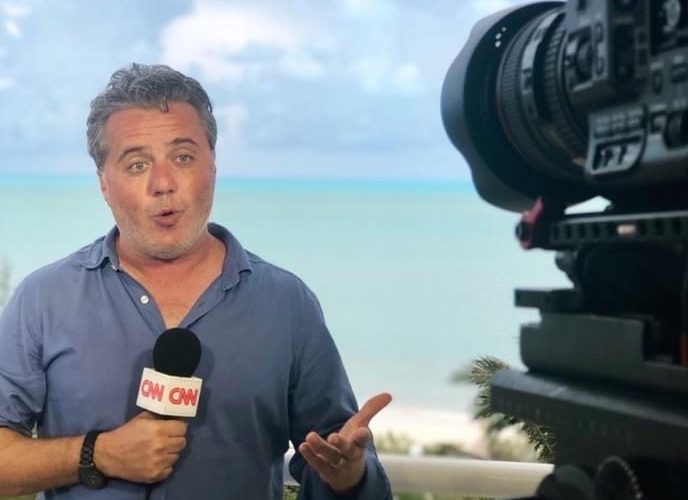 Patrick Oppmann is CNN’s Havana based correspondent and Havana bureau chief, responsible for covering breaking news in Cuba and the surrounding region. Patrick has reported to the world the most important events that have happened in Cuba over the past ten years.

He’s witnessed all of it, firsthand; the reopening of the US embassy after 55 years, the visit of Pope Francis, the Rolling Stones concert, the Chanel fashion show, the visit of President Obama (the first president to visit Cuba since the revolution), the death of Fidel Castro, and the temporary restoration of diplomatic relations with the US in 2014.

My job is to tell people’s stories and everyone in Cuba has a story.

I met Patrick in Cuba in 2018. I reached out to him before one of my trips to Cuba and asked him if we could have a meeting. Patrick’s response was gracious and memorable, “I’m not sure what a NY stylist wants to meet with me about, but of course I will gladly meet with you, Evan.” We chatted for a while and then Patrick gave me a tour of the rooftop that was the back drop for some of CNN’s most significant coverages from Cuba including the visits of Pope Francis and President Obama to the island.

Patrick is also a talented photographer and in 2019 I was honored to attend the opening party for his first solo exhibition in Havana. I interviewed Patrick to give some insight into the world of an American reporter living in Cuba (edited for clarification only)…

Tell me who you are, where you are from, what you do.

I am a correspondent for CNN and the Havana bureau chief which is where I live.

I have been a correspondent for CNN for about 14 years, living in Havana for the last 10 years. Growing up I was fascinated by Cuba. My grandfather was here in 1958 when the revolution took place so I heard a lot of stories when I was a kid. Then I began visiting Cuba in the 1990s when the island first reopened to visitors. A few years later I met my wife Alex in Havana. She grew up in Panama but has a Cuban family. We live around the corner from the house her grandfather built where her Mom grew up. The house was confiscated by the government after the revolution. That context helps me understand a lot of this island’s complicated history. It’s a fascinating place to live. My job is to tell people’s stories and everyone in Cuba has a story.

What is it like to live full-time in Cuba? Tell us what it’s like to raise a family in Cuba.

Living in Cuba is an adventure that is probably not for most sane people. Cubans are very warm and this island is a beautiful place with a rich culture. But it’s always a challenge as a reporter to know what is going on and who is telling you the truth. We have many more resources than our Cuban friends but we are still impacted by the shortages that are part of life here. Cuba is for the most part very safe and Cubans adore children. Our kids have learned to be patient growing up here and that there is not an abundance of things people are used to in the US. Most of the time they are outside playing which is how kids should grow up.

How has it been for you to be a foreign journalist in Havana covering the events of the past six months?

The protests on July 11th were an incredibly significant moment. Thousands of people took to the streets across this island demanding greater freedoms and opportunities. The Cuban government was caught off guard and reacted in a very heavy-handed manner. Cuban officials blame the US embargo for the unrest but the underlying conditions that led to the protests are still present.

What do you want people in the United States to know about Cuba?

Despite the sense that the Cold War never really ended here, I think most Cubans are not ideological people. They love American movies and music and want to be able to have contact with relatives in the US. Many people I know feel trapped by this never- ending conflict between the US and Cuban governments and just want to have normal lives.

If you had to choose an actor to play the role of Patrick Oppmann in a film, who would you pick?

Hah, I am not sure a movie is going to happen anytime soon. I think my wife Alex would be happy with Matt Damon starring in that film.

Patrick Oppmann currently lives in Havana with his wife Alex and their four children. His life in Cuba thus far has been one that movie scripts are written about. In 2020 he was nominated for an Emmy for his news coverage of Hurricane Dorian’s impact on the The Bahamas and won the Society of Professional Journalists Deadline award. Patrick Oppmann is a talented journalist, photographer, writer, and a truly gracious human being. The world is waiting to see what will come next for him.

Evan Elkowitz is a New York stylist and fixture in Cuba’s underground fashion and design scene. After many years as a stay-at-home mom, she began a career as a stylist. She ventured to Cuba for the first time in December 2017 and styled her first photoshoot in Havana. Since then she founded the first Fashion & Arts tour to Havana with the goal of collectivizing her knowledge in order to give an insider's look into the unexpected creative world of Cuban design. She also loves salsa and Cuban music in general!

‘Chancla Culture’: And Why It Hurts So Much

Textura Is Creating Modern Design With Classical Training in Cuba

Jeronimo Lim and the Legacy of Koreans in Cuba