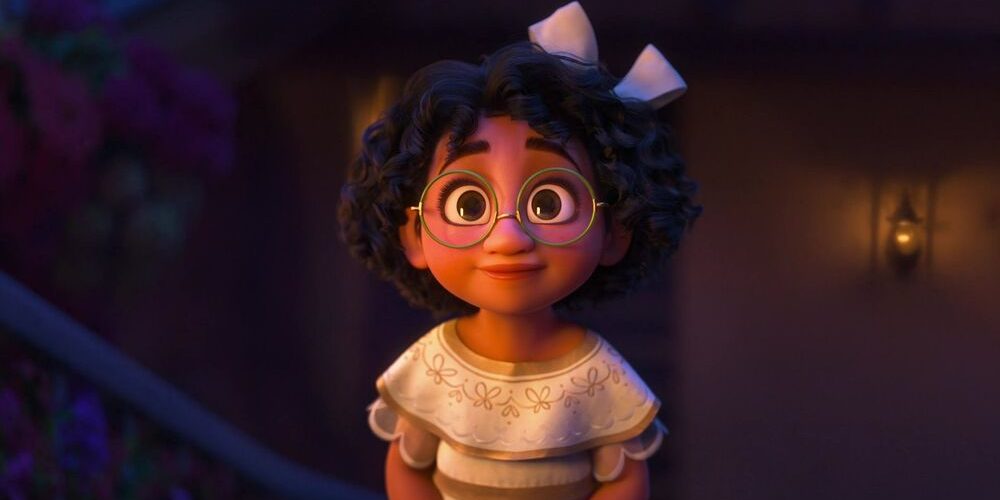 Alezandra Russell
6 min read
1 comment
FacebookTwitterEmailLinkedInWhatsApp
This $150 million dollar animation film tackles the sudden loss of the Madrigal family’s magical “gifts”, but in fact much deeper issues were being addressed.

Disney’s newest animation film, Encanto, highlights the story of a multi-generational Latinx family, the main characters could have easily been plucked from any one of our dynamic families. I know I definitely saw parts of my abuela (la poderosa), my tio (el loco), and my primo (el consentido) throughout the film. I even saw myself in Maribel, the determined problem-solver who saves her entire family.

This $150 million dollar animation film tackles the sudden loss of the Madrigal family’s magical “gifts”, but in fact much deeper issues were being addressed: generational and psychological trauma in Latinx families.

For second-generation Latinx children who were born in the US to immigrant parents (like me), researched that we uphold a deep connection to our parent’s immigrant experience (así es)…

Receiving critical acclaim for its animation and celebration of the Latinx culture, the surprisingly vocal feedback came from an unexpected group, first and second generation Latinxs. This on trend and plugged-in population of Latinxs watching the film, highlighted the harmful stereotypes they grew up with, being perpetuated and even celebrated.

The Meaning of Encanto, the New Disney Movie

Related Post: What Is Latinx and Why Should It Matter?

Set in what could easily be the lush jungles of Cuba, Mexico, or any Latin American country for that matter, Encanto, is a film that takes Latinx viewers on a journey into the all too familiar dynamics of a Latinx familia and it’s nuanced representation of classic family characters.

There’s the ostracized tío (Bruno) that no one is allowed to speak about, the 15-year-old daughter (Mirabel) who takes on the massive adult responsibility of preventing her family’s destruction, the older sister (Luisa) who literally supports the weight of the entire family on her shoulders, and then there’s the fierce matriarch (Abuela), determined at all costs to protect the family’s legacy. (Sound familiar?)

What Is Generational Trauma?

First generation trauma, is a term used to describe the emotional struggles of children whose parents are immigrants. This trending topic amongst the Latinx community has filled my IG feed with #FirstGenTrauma posts and TikTok videos of sons and daughters addressing their internal struggles.

For second-generation Latinx children who were born in the US to immigrant parents (like me), it’s been researched that we uphold a deep connection to our parent’s immigrant experience (así es), that we tend to be bilingual (Sí, también hablo español), that we attended college at higher rates (Class of Pepperdine 2003!), and that we effortlessly straddle two worlds, two cultures, and two traditions. I often feel like breaking out in canto (pun intended) to the famous Facundo Cabral song my mama would play on repeat that says, no soy de aquí, ni soy de allá. (“I’m not from here, I’m not from there.”)

The generational trauma of Latinx families often looks like the pressure for children to resolve our family’s burdens, the heavy responsibility that comes with being born in (or brought to) the US and expected to thrive.

This unspoken demand on Latinx children, to not just excel, but to over excel in school, life, and family is constant. All this invisible pressure so we can prove to ourselves and to our padres that our family’s sacrifices were not made in vain.

Generational traumas and toxic family expectations can be seen throughout the Encanto storyline. Traumas I immediately picked up on included parentification, double standard parenting and burdens placed on the Madrigal daughters (just to name a few).

The term for this first-generation role switch, when a child is obligated to act as a parent to their parents or siblings is called Parentification. When Maribel takes on the very adult task of rescuing her entire family, that right there is parentification.

“At a young age, some children of immigrant parents had to navigate school, government agencies, or workplaces alone — because they’re the first in their family to do so — so as an adult, it’s not easy to identify the imbalance they’re feeling or ask for help.” (LA Times, 2021)

Previous generations, although unintentionally, have placed an unrealistic expectation on sons and daughters, and our new role is to erase these constraints.

I experienced parentification within my own personal life. I remember being ten years old and depositing checks, writing checks, and artfully calming down our Landlord, Mr. Rios, when a check was returned. I was a young pro at all things adulting. I thought that was just the norm, I mean didn’t every kid have memorized their parent’s bank account and social security number by heart? It wasn’t until a friend asked me for help writing his first rent check, that I realized, no that wasn’t normal. (BTW, he was twenty-four).

The unspoken but all too common double standard, when it comes to gender roles within Latinx households, is yet another landmine for sons and daughters to navigate. Building social and emotional literacy in our Latinx families challenges these double standard parenting styles, but let me tell you it isn’t easy!

In so many cases, it’s not just the parents but the extended family and friends who enforce this unequal dynamic between sons and daughters. How often are Latina daughters forced to hear tía María ask, “y cuando te vas a casar?”, or tío Pedro ask, “hazme un plato de comida hija”, or the neighbor chismosa “cuando vas a tener hijos?”

We see Julieta, the eldest of the three daughters, take on the high standard of perfection within the film. Keeping up with these expectations consistently placed on daughters, over time, births resentment and hyper-independence where they find it difficult to ask others for help.

In order to confront generational and psychological trauma in Latinx families, we must first be able to recognize the patterns. Thankfully, the Disney movie Encanto provides us with a perfect opportunity to address these generational traumas.

We must be willing to build a new archetype of roles within a Latinx family outside of antiquated gender roles. The demand that daughters must embody the “perfect mamá”, or that sons must be “macho” and never show emotion. We must stop competing with the invisible expectation of these made up ideals we grew up with.

Previous generations, although unintentionally, have placed an unrealistic expectation on sons and daughters, and our new role is to erase these constraints.

So grab a bucket of popcorn (or yuca chips), your abuelitos, tíos, and padres and let this film provide an opening to a much needed conversation that could magically change your lives and future generations to follow.

Alezandra Russell is an award-winning activist, author and founder of Urban Light, a non-profit organization dedicated to empowering the lives of #Boys affected by human trafficking. Since opening its doors in 2009, the organization has provided emergency services to over 9,000 vulnerable young men and Boys. Urban Light remains one of the only organizations in the world working specifically on behalf of Boys who are overlooked, forgotten, and ignored in the global discussion of trafficking and exploitation. Russell, who was forced to flee Thailand in June 2018 as a result of her work, continues to advocate across the globe for the safety of trafficking survivors, migrants, refugees and marginalized populations.

The Cuba Coast and a 3,000 Mile Fight Against Climate Change

Doris Kearns Goodwin Is a Historian Who Is Part of History